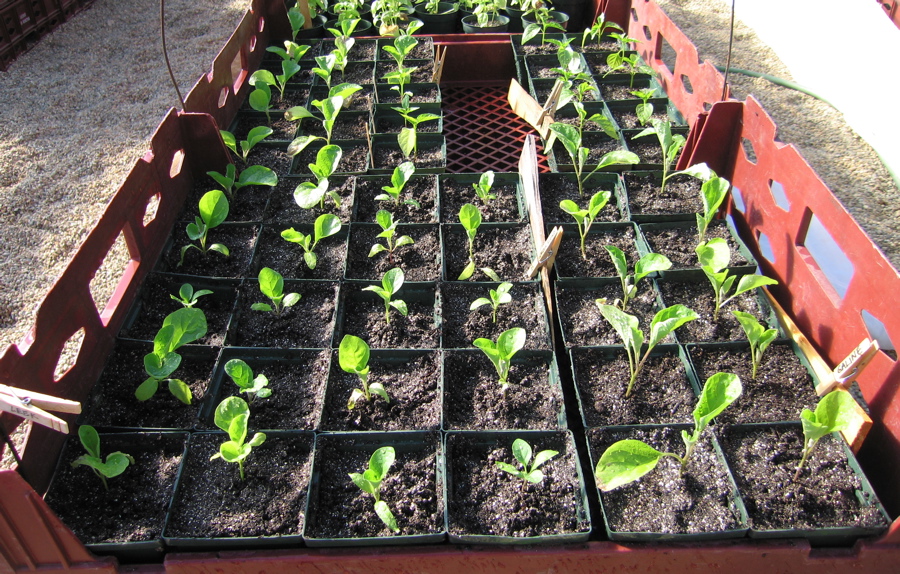 I spent the better part of the day potting up eggplants, peppers, marjoram, cilantro, lavender, and rosemary. I went through 9 bags of potting soil and used up every single spare 4″ pot I could find. Last year, when I bought the box of -405- 4″ pots, I figured I’d be set for life. Well, it looks like I could use another box. The hoop house is also starting to feel nice and full. We’re about 2 weeks away from the major outdoor planting rush, but a lot of the stuff I potted up today was a bit scrawny. I’m hoping a couple weeks in a hot hoop house will give it all a nice boost before going outside. Good news: the tomatoes in the trenches are looking lush and I can see the first flowers forming. I’m already pulling suckers off the stems! 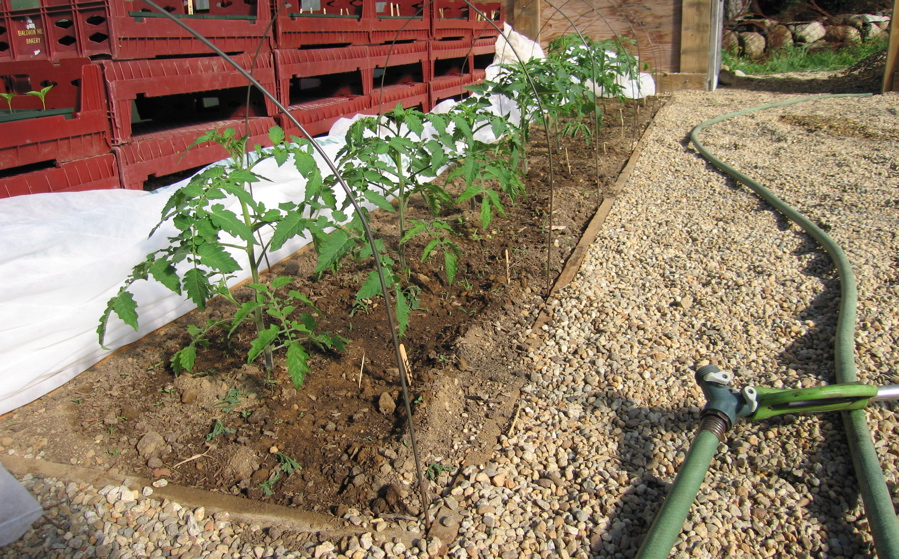 Also, the tomato plants that I potted up a week and a half ago are finally taking off. I think I did some damage to the tomato roots when I was pulling them out of the trays and putting them in larger pots. For the past two years, I used soil blocks for tomatoes; and while the seeding process was messier and more time consuming, the potting up process was effortless. This year, I used Pro-Trays and the results were reversed. The seeding process was simple, fast and clean, but potting up was a huge pain because a lot of the plants stuck to the inside of the trays and a lot of roots were torn. I need find a solution for next year. There has to be a trick for removing plants from the pro trays. The other thing I noticed was that the plants seemed a bit healthier and sturdier with the soil blocks. I’m learning all this as I go. Luckily, a lot of veggies are pretty forgiving.

Hey, this evening we’re getting a much needed soaking rain!

Also, Happy Anniversary to us! May 18, 2007 is the day we closed on the house. So this marks the end of 3 years here. In some ways, it seems like a lot longer than 3 years (with the amount of work we’ve done.) But on the other hand, year one was really focused on moving and the wedding. So we’ve really only been planting and growing things for two years… which really feels strange. So much done, so much to do!